Thanks to sufermag.org for the following:

Sea Shepherd Founder Captain Paul Watson has been under arrest in Frankfurt, Germany, and faces extradition to Costa Rica for an incident that occurred over a decade ago when he apprehended an illegal shark finning operation off the coast of Guatemala. While Captain Watson was “released” Monday from Frankfurt prison on 250,000 Euro bail on Monday, he remains under house arrest during which time the German courts will consider whatever documentation Costa Rica is able to produce in what appears to be a case motivated by political agenda.

Eleven-time World Surfing Champion and Sea Shepherd Advisory Board member, Kelly Slater, recently stepped up to the plate to rally international support for Captain Paul Watson in the surfing world. On Sunday he wrote:

“This situation cannot thrive if there is transparency. For example, connections and investments by the Chinese and Taiwanese with Costa Rican for infrastructure investments in Costa Rica, result in Costa Rica turning a blind eye to the shark finning industry and illegal fishing off the coast, all the while Costa Rica promotes ecotourism based upon the country’s biodiversity and natural beauty. If a light is shined on these connections, their ability to pull secret levers of power will evaporate.”

Added Slater: “The situation that we find Captain Watson in, now shines a light on these dark corners. It is literally now a simple choice by government, to overturn and release Captain Watson given that the entire incident where he confronted the illegal poachers was caught on tape. The video establishes the facts, and this calls into question the motives of those continuing to pursue Captain Watson despite those facts. No person or vessel was injured during the melee and Watson was following instructions from Guatemalan government officials while protecting natural resources under the UN protocol. He’s already paid a fine and been released, but someone still has a bone to pick with him somewhere else in the world, and they are wrongly being helped behind closed doors by some murky government power.

Established in 1977, Sea Shepherd Conservation Society (SSCS) is an international non-profit, marine wildlife conservation organization. Our mission is to end the destruction of habitat and slaughter of wildlife in the world’s oceans in order to conserve and protect ecosystems and species.

Sea Shepherd uses innovative direct-action tactics to investigate, document, and take action when necessary to expose and confront illegal activities on the high seas. By safeguarding the biodiversity of our delicately-balanced ocean ecosystems, Sea Shepherd works to ensure their survival for future generations.

The Super Fish is one of the most popular boards in the GSI range and continues to win converts worldwide. The reason for the Super Fish’s success is that it blends high performance surfing with wave catching ability. The step deck design is the magic element. The step deck gives the board lots of volume under your chest for buoyancy and the low volume rails allow you to really dig deep when you turn, as if you were riding a performance short-board. It is the best of both worlds. Paddle power and performance.

Summer is hesitant to embrace us this year, all showers and wind and dull skies and only some sunny warmth.  The surf hasn’t enthralled either!  Two weeks leading up to Easter and that was our lot, so far.  But it is around the corner, those halcyon days with lazy waves, good friends, good food and great times.

But in amongst the hurly burly of that sunny-summer-living there is the inevitable few, around here fortunately very few and isolated occasions of theft and annoyance.  And so security seems to be one of the issues being talked about more often by the crew in the shop recently.  More specifically, what to do with those electronic car keys when you’re surfing.  It is that time of year!  No more leaving them in the ignition when badly parked, nor on top of the tyre, not for the next few months.  The chances are that everything will be gone by the time you get back from that dream session!  And so, inevitably the talk turns to ‘what to do with the keys‘.

I have had blanks cut. The cut blank will only open and lock the door, with no electronics to get damaged, so I can pop it in the leash pocket.  But that means leaving the main keys in the car, which may lead to insurance problems if it was nicked?  An old mate of mine wraps his in cling film, which has worked so far.  The rest of the guys are split between using those waterproof pouches (there are a few and they are all similar) or the ‘Key Safe‘ things that lock to your car with a combination code.  It seems that it’s vital to make sure that there are four digits on the combination lock and that the moving bits can’t rust.
And what about the boards?  Leave them on the car at your own risk during high Summer. Even here now.  I have a set of those lockable tie downs and they travel with me everywhere.  Stainless steel wire stops the knife attack, the beefy lock stops the casual grabber.  What happened to leaving your board on the beach?  Well, to be fair back then they were great heavy big old things that took some dragging about!  Not the ideal opportunistic opportunity that your average casual grabber would be tempted by I guess! 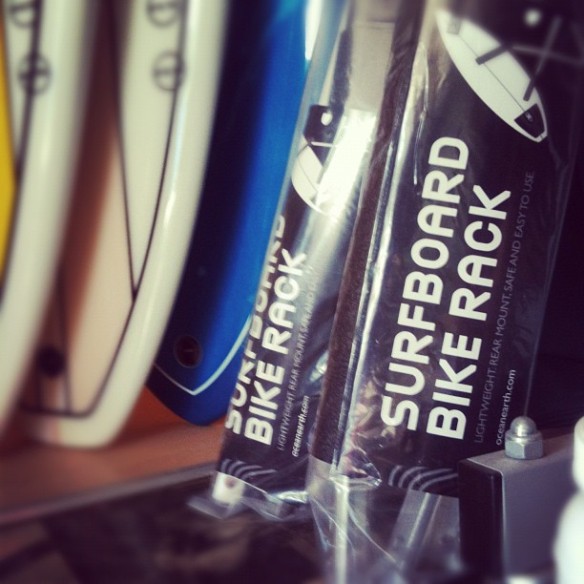 But the best solution?
Leave the car at home, get a bike board rack and cycle.  Ah but then, these days you would have to lock up the bike!
Let us know what you think at des@constantinesurf.com